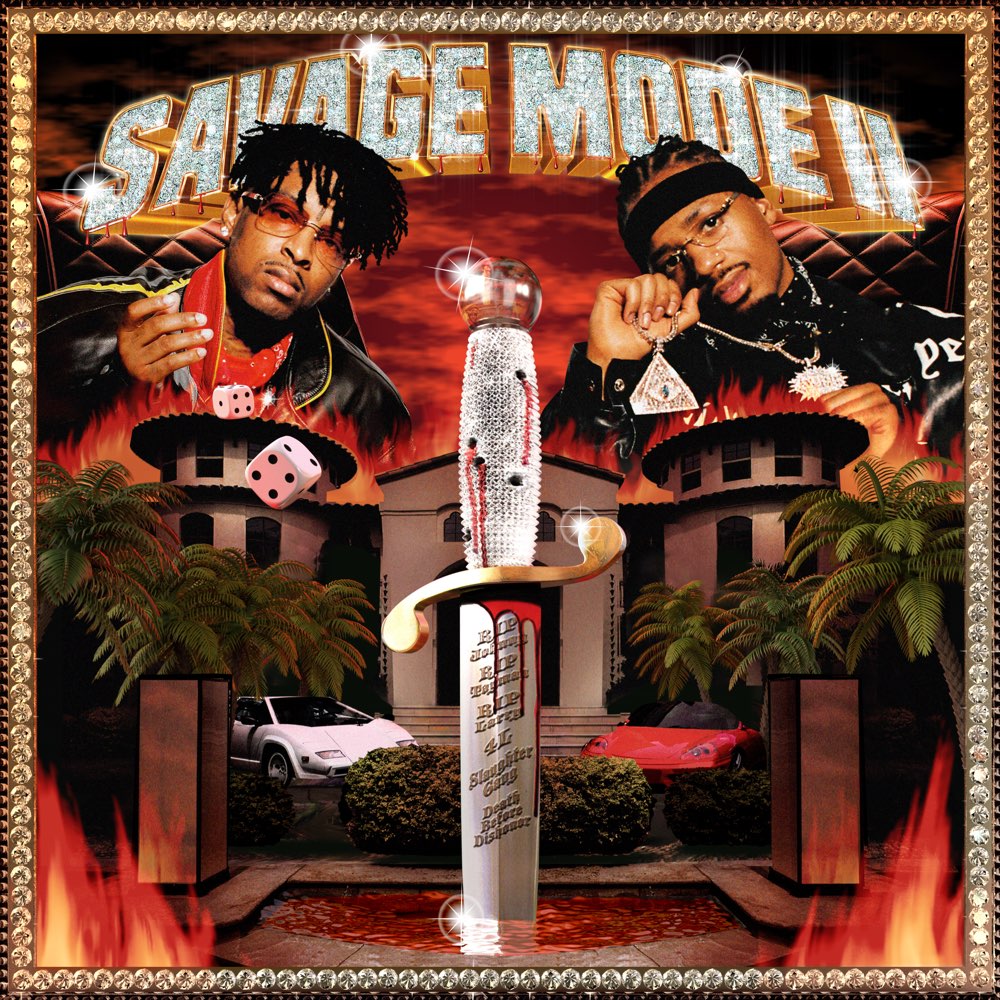 21 Savage and Metro Boomin team up again to bring us their latest album "Savage Mode 2". The album includes hit songs like Runnin, My Dawg and Glock In My Lap. Which songs are you listening to?

21 Savage and Metro Boomin return to give us the sequel to their 2016 project Savage Mode. Savage Mode 2 was released in October 2020, but SOTD didn’t exist then so we couldn’t speak on it. Here we are in February 2021, glad to announce Savage Mode 2 is proving to be a hit amongst hip hop heads.  The numbers speak for themselves, as I am writing this album description, Savage Mode 2 currently has a 4.8/5 rating on Google, with 97.1% of the people who have listened to the album – liking it! With numbers like that, he might be in for another Grammy this year.

The album has 15 songs, with a run time of 44 minutes. I know I said the album has 15, when in actuality it only has 13. However, when Morgan Freeman is on YOUR intro’s and interludes – Those are not just words, it’s wisdom from god himself (Bruce Almighty fans know what’s up.. religious audience, it’s just a joke, not being blasphemous, hence the lowercase G  😀 ). Savage Mode 2 includes the following hit songs, Runnin’ (watch video), My Dawg, Glock In My Lap, Mr. Right Now and Slidin’. With features on the project from artists such as Drake, Young Thug and Young Nudy. The beats for Savage Mode 2 were all done by multi-platinum producer Metro Boomin. The artwork for the album cover made by the historic Pen and Pixel company.

Read below to see what the editor’s at Apple Music had to say about 21 Savage x Metro Boomin Savage Mode 2:

The impending arrival of 21 Savage’s SAVAGE MODE II was announced with a trailer directed by Gibson Hazard and narrated by Morgan Freeman. The takeaway, aside from the fact that Savage and collaborator Metro Boomin were emerging together from separate and presumably unrelated periods of inactivity, is that the project was much more than just two pals hanging out. With SAVAGE MODE II, the pair have effectively reached back to the era when 21 Savage wanted nothing more than to let rap fans know he was a “Real Ni**a” with “No Heart.”

SAVAGE MODE II follows 2017’s Without Warning—also featuring Offset—as the third collaboration between the pair, the first being 2016’s Savage Mode. Savage and Metro would go on to become exponentially more successful in the years following, but SAVAGE MODE II songs like “Glock in My Lap,” “Brand New Draco,” and “No Opp Left Behind” effectively recreate the us-against-the-world energy of the original. Elsewhere on the project, Savage is every bit the rap superstar we know in collaboration with Drake and Young Thug on “Mr. Right Now” and “Rich N***a Shit,” respectively. But whether he’s talking about “Snitches & Rats” (with Young Nudy) or opening up about a relationship gone sour on “RIP Luv,” 21 Savage sounds like he’s at the top of his game while he’s back in the saddle with Metro. Or as Morgan Freeman puts it in the trailer, “When someone is in Savage Mode, they’re not to be fucked with.”

Download or Stream 21 Savages x Metro Boomin’s “Savage Mode 2” below. Also, check out the trailer on YouTube for the album, which was done by Gibson Hazard. With Narration by none other than Morgan Freeman (who also did the intro for their album).